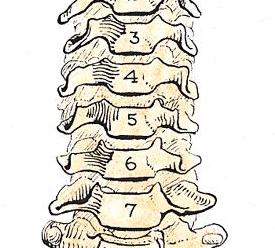 The cervical spine consists of seven vertebrae.  Shown here are the third cervical, (C3) through the seventh cervical, (C7)  vertebrae. 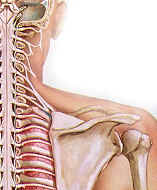 When the nerves that pass through this area are involved with subluxation areas such as the neck muscles, the shoulder, as well as the arms and hands are affected.  In these situations, problems such as neck pain, arm pain, numbness, stiff neck, bursitis, as well as many other musculoskeletal problems are possible.

In addition to these areas, nerves originating in this area of the spine innervate the throat, sinuses, nose, thyroid gland, lymph nodes, diaphragm, and other organs and systems.

When subluxation is involved in these areas a variety of functional problems can result.

It is imperative for the organs, systems, muscles, joints and all other tissues in these areas to receive proper nerve signals in order for them to function as they were intended.  Subluxation reduces this function thus allowing the areas supplied by the nerves to be working at less than their optimal ability.

As with any portion of the spine, subluxations in this area can also have an effect on other segments of the spine and creating imbalances, postural problems, and functional problems elsewhere.